Mark McGwire, home run king, who single handedly rescued a much ailing baseball in 1998, was denied access by a large margin to the Baseball Hall of Fame yesterday. McGwire is an alleged cheater, in that he supposedly took supplements — supplements that were legal according to baseball rules at the time. McGwire is a legend, he was a driving force behind the reinvigoration of baseball in the late 90’s, after the pathetic downstride post 1994 strike.

Read on for more. 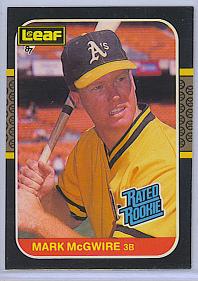 The problem is two fold, I think. First, the people who do the electing, sportswriters, are out of touch with the actual fans of professional baseball. Most fans fall into one of two groups: those who know their crap, and people who know pretty much nothing. Seriously, ask the average fan to name just three people on their favorite team and they will struggle. I’ve tested this.

The HOF voters usually consist of the first type of fan, and they get very technical in their analyses, and often, I believe, forget that the game is for FANS, and that it’s FANS who generate all the money, and FANS who keep the sport alive.

But ALL types of fans know Mark McGwire. “Big Mac” was the sensation of America back in 1998 when he and Sammy Sosa duked it out for the home run title in a famous, season long battle for the better pace. And McGwire is one of the best known players even today. There’s barely a bigger name in baseball; Bonds is more known for negatives today than postives, and no one else is that big: not Jeter, not A-Rod, not Ichiro, Rivera, Ryan Howard or David Ortiz. The only person who you could make a case for would be Roger Clemens. And frankly, I don’t think Clemens popularity amongst the general public, and even the general public fans, know Clemens like they know McGwire. McGwire was the last *big name* in baseball, bigger than Ripkin and Gwynn for sure. Tony Gwynn and Ripkin are ENTIRELY deserving of HOF status and I’m thrilled they made it, but I promise you more Americans — hell, more baseball fans — know McGwire than Gwynn or Ripkin.

Cooperstown is for people who have really made an impression on the game. It’s where fans can go to remember what baseball was like in previous eras. To omit Mark McGwire from the record is to ignore a large chunk of history, even if he HAS used steroids.

Now, on to the second issue: for whatever reason, there seems to be some sort of differentiation between being voted in on first ballot versus subsequent ballots. Sports journalists often feel as though someone who is… I guess… “less worthy” of HOF stature should be denied access right away but voted in in a later year of eligibility.

The reasoning completely eludes me. Perhaps someone is not a hall of famer one year, but then, the next year, is somehow better? Why do people take this so seriously? This is just stupid. Now there’s a backstory to the votes?? Come on!

Seriously, I think if you don’t vote for someone, they should *immediately* drop off the ballot. Either they are a hall of famer or not. You shouldn’t be able to say “last year I didn’t think they were good enough, but now they are.” That’s hypocracy. And it’s just plain old dumb.

I think that the Baseball Hall of Fame election system needs a shake up, something to revitalize it. The current voters have proven themselves to be irresponsible, inconsistent, and out-of-touch.

7 Replies to “Mark McGwire Not Elected to Hall of Fame”