But then, there’s this: 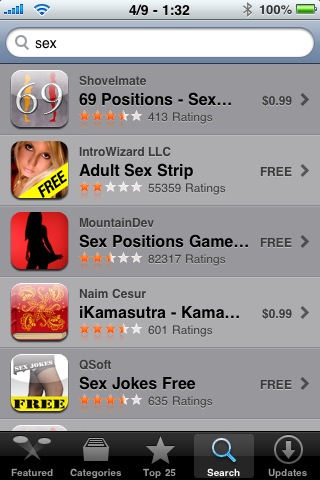 Then there’s the now infamous section of the iPhone 4.0 SDK that bans the use of non-native apps on the iPhone.  But let’s get real, shall we? As Gruber said, this is about only one thing: once the apps are portable, the device lock-in is compromised.  It’s not about multi-tasking, although, there’s probably truth in that, it’s not about new APIs, although, there’s probably truth in that too.  But it’s about corporate strategy: keep people on Apple products in the Apple ecosystem.

Let’s not forget that Adobe has built its CS5 master suite with a new feature it’s been proudly touting: the ability to compile Flash apps as iPhone binaries.  So they are the ones with egg on their face since that feature is simply pointless now.

If I were Adobe, after the peak of sales after the release of CS5, I’d announce that it’s the last Adobe suite to be released for Mac.  No more Photoshop, no more Lightroom, no more Illustrator.  Maybe even cut off Adobe Air.  You could pretty rapidly destroy the enterprise presence for Apple, as people decide if they want to keep working on Macs, given the lack of true enterprise quality tools.   It would be an interesting corporate strategy. (Update: They say nope.)

If I were Apple, I wouldn’t worry too much.  Businesses are now a small subset of Apple users, who are, more and more, college students and home users.  And those users would rather buy iWork, and maybe a few more apps Apple wasn’t producing (such as Office or Pixelmator).  No big loss, right? Or is it…?

Once Apple loses the “it’s better for graphics” thing, then it might be labelled “not for serious work.”  Microsoft runs some ads pushing a new image: Macs are okay for home use, but you need Windows to do any real work.  And then “real workers” start switching back to Windows at home.  Maybe.  But it would make for a grand corporate strategy.

It’s interesting that once again, the computing landscape is full of action.  I can’t wait to see how Apple behaves in the next few years.  It may well deliver some of the best software ever.  Then again, soon enough, I might be using Windows 8, an Android phone, and an HP Slate. Either way, the future is exciting.

3 Replies to “Apple's Future is Exciting”