Yesterday, during commercial breaks of the Saints/Vikings NFC championship game, I was flipping over to watch bits of Robocop 2. When I was younger, I remember my friends would gather to watch Robocop and were very excited when the sequel was announced. Watching it now, however, I see how bad that movie was. Or was it?

The first thing I noticed is that Robocop is slow and deliberate, and when his “joints” move, they produce a hydraulic buzzing sound. So we’ll need him to be smoother in movement, and without announcing his presence. He’ll need to be significantly lighter on his feet than the slow and heavy-stepping original.

The original sported an eye plate, that stretched only a centimeter or so in height and a few inches in wrap. That will need to change to be supplemented by smaller cameras that can give Robocop a 360 degree view of his surroundings.

Since Robocop was severely damaged after being caught in a magnet, we’ll need a better metal. I propose new Robocop be constructed of a smarter non-magnetic alloy or so-called “space age” metals, like titanium, scandium, vanadium, tungsten, or magnesium. We could also increase his strength significantly, without increasing his weight. Maybe a graphene wrap as well?

The original Robocop recorded interaction on an in-body video camera, presumably storing it digitally, which was pretty pretty commonplace for the 1987. New Robocop will not only record interaction in 4K video to a bank of flash memory, but he will be equipped with the latest Wifi and some sort of cellular connection like LTE or 5G (he’ll be in a big city, so we can presume coverage). He will transmit all of his data in near real-time, so he won’t need to store terabytes of memory in-body. Of course, his uploaded interactions would only be transferred over a zero-trust VPN to a cloud backend.

New Robocop will not have exposed skin (or internal mechanics). Period. That’s weakness. 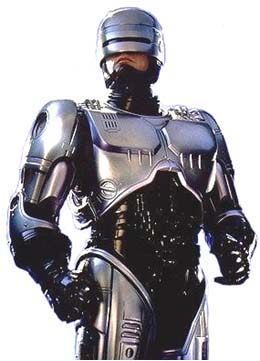 Original Robocop stored his gun in his leg. This is an outdated concept based on a concept that looked cool in the 80’s. Today’s Robocop will store multiple weapons throughout his body, small rubber-bullet-like projectiles perhaps in his forearm. We can equip his chest or fingers with mace or tear gas. If he requires an actual gun, it will be not be trigger deployed. It will be activated only when connected to Robocop, and very likely controlled via secure DECT or Bluetooth. Maybe the trigger will be functional, but only unlocked when authenticated via some sort of near-field presense detection. There’s simply no good reason to rely solely on old fashion triggers that can be exploited. In the event of system malfunction, a manual weapon will be present, but since Robocop shouldn’t be relying on his gun most of the time, he will have a nightstick of some sort.

New Robocop should not have an over-synthesized voice.

One of the constant flaws we saw in Robocop 2, as they attempted to build a second Robocop, was the lack of control they had over the machine. We fix this by running the Robocop program on a Linux-based system – or better yet, OpenBSD or another microkernel real-time OS – and jailing/chrooting it. New Robocop can do what he wants, but if he gets out of hand, we still have control. We allow remote SSH logins from authorized IPs, utilize aggressive multifactor authentication, and sudo up to root guaranteeing ourselves a remote shutdown option. No sloppy infrared remote control here, just pure IP access.

Once Robocop is mostly a computer, we’ll need a few more accommodations, because that becomes the chief point of vulnerability. We’ll need pretty sophisticated software here to prevent someone from hacking into Robocop, but that’s of course the plot of the movie, I’d suggest: someone hacks into Robocop remotely and alters the programming, and despite Robocop’s knowledge that he’s been compromised, he’s unable to prevent his own actions since he’s jailed into a subdirectory. The twist at the end, I’d suppose, is that some hot-shot teenage hacker finds an exploit and jailbreaks Robocop remotely, thereby giving Robocop the ability to control himself, at which point, he pretends to be following orders, but instead, tracks down the guy controlling him.  Right before his death, the guy should shout something cliche like “But… I’m your masterrrrrrrrrrrrrr….!”

One of the unaddressed issues I saw with the robotic cops in the movie was the perpetual need for a lubricant like oil. It seems submersion in water would simply short out all of these solutions. So I’ll reiterate the lack of exposed skin and mechanics, and we’ll spend some time making our Robocop IP68 water resistant or better, and reuse some sort of internally stored WD-40-like fluid, but is also “green.” It would be a shame to build a billion dollar robocop only to have him quashed by a bucket of water. 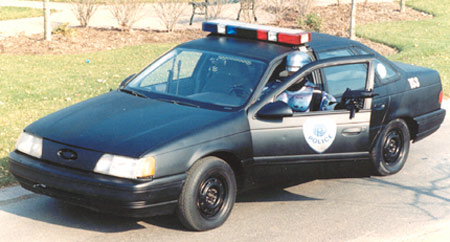 I’d like to see Robocop be a little less terrifying to the average citizen.  Robocop ought to represent something, and cops are supposed to be there to protect and serve the average citizen, not just to get the bad guys. So Robocop ought not be stomping around the police station and calling people “punk,” nor should he be be marching into an arcade, smarmily offering “Isn’t today a school day?” Nein, Robocop should be there for citizens, first and foremost.  We’ll disable his sarcasm and “witty quip” programs.   Robocop should offer an air of protection, not a fear he’ll malfunction.

Lastly, if I’m going to invest a billion into a Robocop, I think I might put him in something a touch nicer than an old, banged up Ford Taurus.